Who Let the Dogs Out? Traffic Stops & K-9s in Florida - Aaron Delgado & Associates

Who Let the Dogs Out? Traffic Stops & K-9s

How the new hemp law affects drug sniffing dogs and why the cops can use them to justify a search of your car… for now.

In Florida, law enforcement officers let the dogs out to conduct a sniff of cars stoped for traffic infractions in as many instances as possible. Why? Because if a trained K-9 smells drugs or other contraband in your car, cops don’t need a warrant and don’t need your permission—an indication by the animal that some contraband exists in a vehicle is all a cop needs to justify a search.

This “sniff search” must be completed within the time it takes for a traffic citation to be written, or the official purpose of the traffic stop to be conducted. It becomes an invasion of rights when a traffic stop is extended beyond what is necessary to write the ticket, give a warning, or finish any lawful investigation.

Are there any changes on the horizon for the use of K-9s in traffic stops?

Just as the implementation of the new hemp law this summer has eliminated the scent of cannabis as probable cause to search a vehicle, this new law will also hamper the reliability of drug sniffing dogs. While these animals can distinguish between drugs and items which are not drugs, the dog merely indicates upon the presence of drugs—not any particular one.

The most common and smelly drug of all is cannabis. The scent can linger for days after cannabis was present in a vehicle. Since the scent of cannabis standing alone no longer supports a probable cause search of a vehicle, the effectiveness of drug sniffing dogs is being called into question. And it’s not only true if you believe defense lawyers who are scrutinizing; top law enforcement officers from the St. Johns County Sheriff’s Office and elected State Attorneys recognize that drug sniffing dogs will either need to be re-trained or even retired entirely if they were trained with marijuana.

What this means for the motoring public is uncertain at this time. The impacts of new legal arguments are often delayed on the everyday lives of most citizens. It will take time for trial court rulings, appeals, and perhaps even a Supreme Court review before we will have a clearly defined answer as to when and how a drug sniffing dog’s indication of drugs in a vehicle can be relied upon for a probable cause search.

How do K-9s detect drugs or other contraband in a car?

Police dogs are not out chasing a high. Rather, the animals are chasing the taste of a treat that is used to entice them to hone their very sensitive and amazing sense of smell towards the scents of crime. Drugs, gunpowder, bomb making chemicals, and human remains all emit odors which these remarkable animals can be trained to detect. As a reward for successfully alerting the dog handler that an item of contraband is too be found in a particular location, the dog is provided the canine version of doughnuts—dog treats. By reinforcing each dog’s already keen sense of smell through regimented training, law enforcement agencies can essentially add non-human members to their investigative units.

The enlistment of these canine sidekicks is supported by peer reviewed studies (questioned by others) and, when introduced with sufficient evidence of acceptable training and application, accepted by courts around the world as evidence against the accused.

The body of support for the deployment of K-9 officers is founded upon some degree of scientific support. Compared to humans, a dog’s olfactory system (referring to their ability to smell) and brain chemistry are vastly more sensitive to odors and capable of distinguishing different odors. Being vastly more sensitive means that if a dog’s vision were as good as its sense of smell, it would have the ability to see things clearly from 3,000 miles away. Another example would be that humans can detect some sugar in their coffee, while dogs can detect a table spoon of sugar in a million gallons of water.

Understanding the biology and physiology of these creatures allows humans to objectively test each K-9’s senses by rewarding dogs who were successful in finding contraband under controlled conditions. Thus, years of practice and litigation have resulted in an almost universal acceptance of the role served by police dogs in the field and in the courtroom.

How do traffic stops with drug sniffing dogs work? 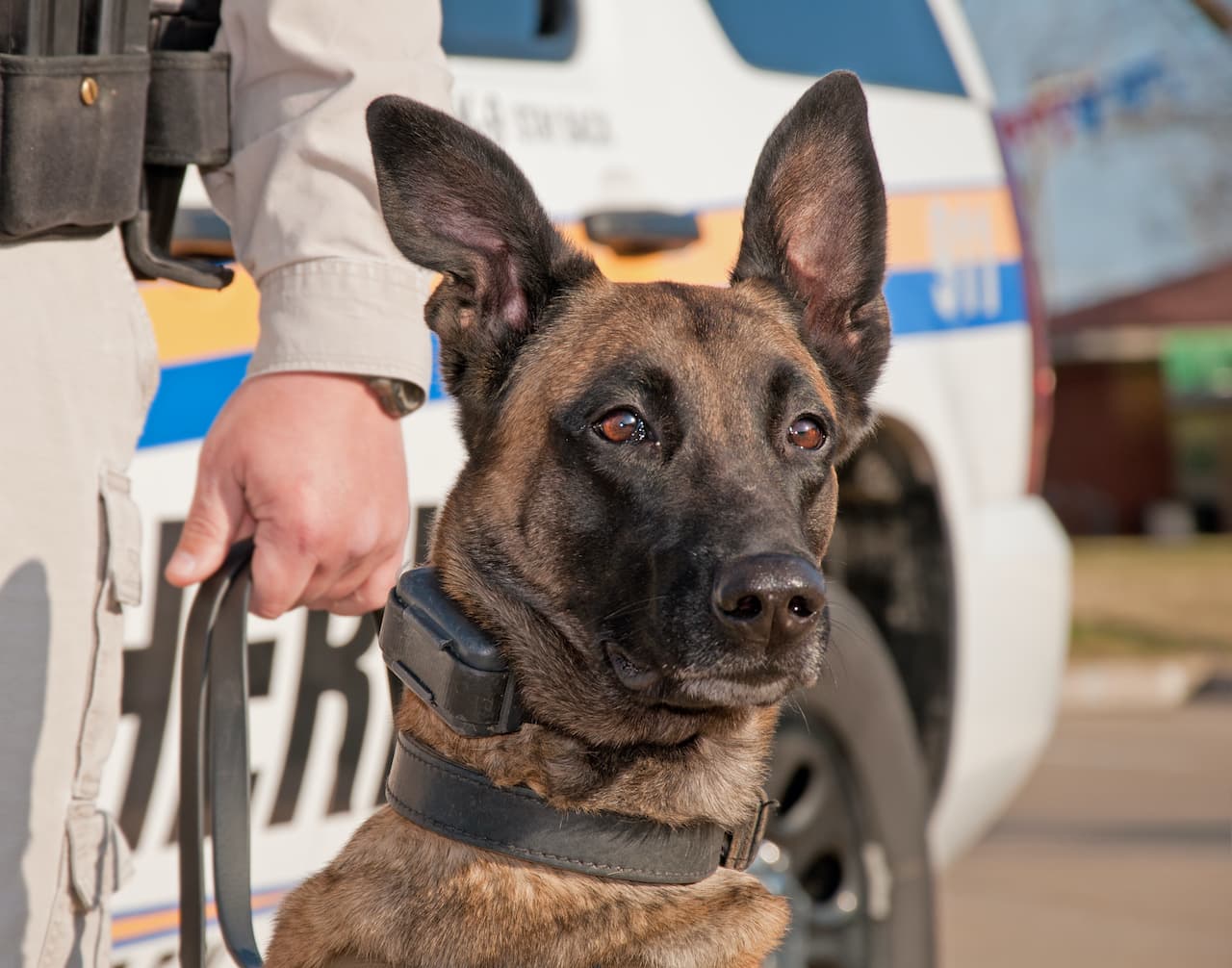 The role of K-9s in traffic stop is relished by law enforcement and dreaded by defense attorneys. Law enforcement agencies will often have a K-9 handling officer patrolling alongside or in a location which allows quick response to a fellow officer. An officer will pull a car over for speeding or some minor traffic infraction and call the K-9 handler out to the scene.

So long as the the traffic stop is not extended beyond what is necessary, the stopping officer is free to ask you to exit your vehicle for the purpose of issuing you the traffic citation or discussing the infraction. While you are out of your vehicle addressing the issue for the stop, the K-9 handler will walk the dog around the vehicle to conduct what is known as a “free air sniff of the vehicle’s exterior.” If the dog indicates—meaning reacts in some passive (laying down or sitting) or active (barking or pawing) way—that it has detected contraband within the vehicle, the officers may search your vehicle. The dog’s indication will depend on how it has been trained.

How are K-9s trained and approved to detect drugs?

Back at the training facility, each handler works with their dog to develop its ability to only indicate when it smells contraband. The dogs are trained by placing drugs in certain places and not others, and tested by their ability to pick out contraband from non-contraband when combined together in a certain location. The dogs are then gauged based on whether they indicate on the areas where drugs actually exist.

K-9 handlers are required to keep records of training and actual K-9 deployments, and make such documents available for inspection upon request by a defense attorney. Once a K-9 and handler have passed their respective agencies’ training programs (which are usually paired with minimum state level requirements) the K-9 can be utilized at the discretion of officers and to the chagrin of the motoring public.

Is it possible to defend against a K-9 indication of contraband in your vehicle?

Considering the dog’s far superior sense of smell, it would almost seem unreasonable to challenge their participation in the investigation of crimes. However, these animals—like people—are not perfect. Even if a K-9 is in fact correct about detecting the scent of a controlled substance within a vehicle, the odor of such substance can be present hours or even days after the substance has been removed from the vehicle. Also, since drug dog handlers are required to maintain records of the success rates of their dogs, too many indications that don’t result in the discovery of drugs can deem the dog unreliable. This circumstance can help a defense attorney suppress any evidence obtained by the dog due to unreliability of the dog’s past endeavors.

A well-versed criminal defense attorney will understand how to investigate and properly argue the issues surrounding drug sniffing dogs in court. That being said, the criminal defense lawyers at Aaron Delgado & Associates look forward to being on the front lines of this new fight. Please know we are available to fight for you 24/7 if you call 386-222-6677!

Flawed Marijuana DUI Testing Leads to Wrongful Prosecutions
With recreational marijuana legal in 11 states plus the District of Columbia, and medicinal marijuana legal in some form in most other states, the number of marijuana-impaired drivers is bound to increase. But for now, law enforcement’s capabilities are currently impaired.
Florida Penalties for Drug Crimes
The punishments for drug crimes depend on the amount of the drug (in weight) and the intention of the individual charged with the crime. Find out the consequences for felony drug crime convictions by drug, including the substantial fines and mandatory minimum jail time.
Passing the Sniff Test: Law Enforcement Responds to Evolving Cannabis Laws
What does probable cause smell like? It used to smell like what an officer believed to be raw or burnt cannabis. Criminal Defense Attorney Tim Pribisco explains the "sniff test" recently adopted by local law enforcement in response to evolving cannabis laws.
386.222.6677
Close