DUI Over 4X the Legal Limit - Aaron Delgado & Associates
The results on this page are no promise of future results. Clients may not receive the same or similar results.

DUI Over 4X the Legal Limit

We came in on this case as co-counsel with our friend and colleague Matt Olszewski, who had been working the case himself up through pretrial. As our client sat in the court room, anxiously awaiting the start of trial, he was in a familiar spot. This was the second attempt by the State to convict our client—the first ending in a hung jury split in favor of acquittal. Despite the State getting two bites at the apple, we once again thwarted their efforts to convict our client.

DUI Evidence from Officers and a Witness

The evidence presented against our client was nothing short of daunting. A third party who happened to witness the accident testified for the State, recounting what he believed to be our client’s erratic driving leading up to the accident. All the officers who were on the scene testified about their observations, all describing our client as appearing intoxicated.

Our client submitted to Field Sobriety Exercises (FSEs), and the officers testified that they believed him to be intoxicated based upon his performance of the FSEs. After he was arrested for DUI, he submitted to a breath test at the police station, where he blew a .339—over four times the legal limit. The State used all this evidence to paint a picture of our client that they presented to the jury, but it wasn’t the whole picture.

We made sure the jury saw the complete picture, not just what the State wanted to show them. We brought to the attention of the jury several known defects in the Intoxilyzer 8000, the breath test machine used across Florida. By thoroughly cross examining the breath test operator and agency inspector, we highlighted several flaws in the machine’s maintenance and upkeep process.

“The breath test machines… are maintained locally by an Agency Inspector with two days of training and continuing education, who checks his or her agency’s machine on a monthly basis—not every 30 days, but once each month, meaning in theory that almost 60 days can pass between ‘valid’ monthly inspections”. … Then, yearly, a department inspector examines each machine after it is shipped to Tallahassee—no such inspection is performed when it is returned to service, rather the local Agency Inspector checks it out again.”

With their thorough knowledge of how the Intoxilyzer 8000 operates, our DUI lawyers were able to point out inherent flaws in the design of the machine—no input for weight, height, or age variables; no volume measurement; unreasonably high acceptable margins of error; etc.

The State wanted the jurors to focus on the .339 while ignoring the lack of other evidence against our client, but we lifted the blinders from their eyes. The State only showed certain portions of the officers’ body camera videos, but we showed the jury the entire videos. We emphasized that the behavior of our client in the videos simply did not match what one would expect from someone over four times the legal limit.

The State directed their attention towards the FSEs, claiming that our client’s performance suggested that he was impaired. Not only did we point out that FSEs are inherently flawed—they expect an Olympic athlete and an elderly woman to perform the same—but we also showed that, taking the entire video as a whole, our client did not appear impaired and certainly did not appear as impaired as he would have been if the .339 result was accurate.

Our DUI lawyers used the visual aid below to highlight the lack of indicators of impairment one would expect from someone four times over the legal limit. 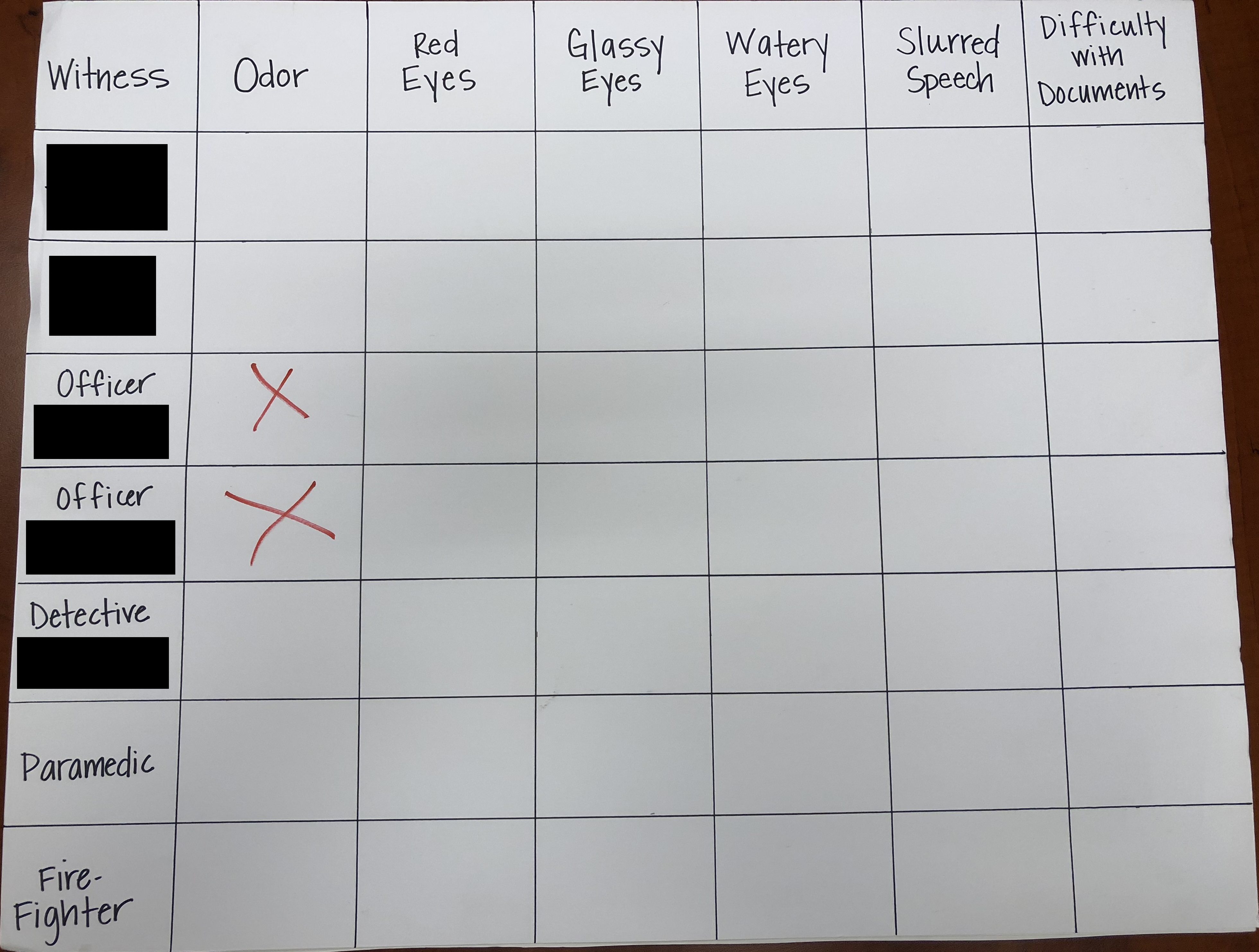 Our client also has severe medical issues that helped shed some light on the evidence the State was presenting. He had various surgeries and gastrointestinal issues so severe that he can barely drink water, let alone alcohol. It’s also possible that his stomach issues contributed to the false positive result on the breath test. Additionally, our client had surgery on both of his knees, which likely impacted his ability to conduct the FSEs—a variable that the tests do not take into account. We also emphasized to the jury that our client had just been in a car accident, and was complaining of concussion-like symptoms—a fact the officers on scene completely ignored.

The final prong of our attack plan was to point out the questionable police conduct involved in the arrest of our client. Not only did they ignore the symptoms he was experiencing when it came to conducting and evaluating the FSEs, but they ignored his medical issues entirely—they did not even call medical personnel to examine our client, despite the fact that he was complaining of concussion-like symptoms.

Additionally, throughout the entire investigation, the officers continually muted their body cameras so that no audio was captured. It was minimized when the State played their selective clips, but when we showed the jury the entire video, they saw just how much had been muted. We highlighted to the jury that the entire investigation of our client was tainted with questionable police conduct, further calling into question the validity of the evidence presented.

Not Guilty DUI Trial in 17 Minutes 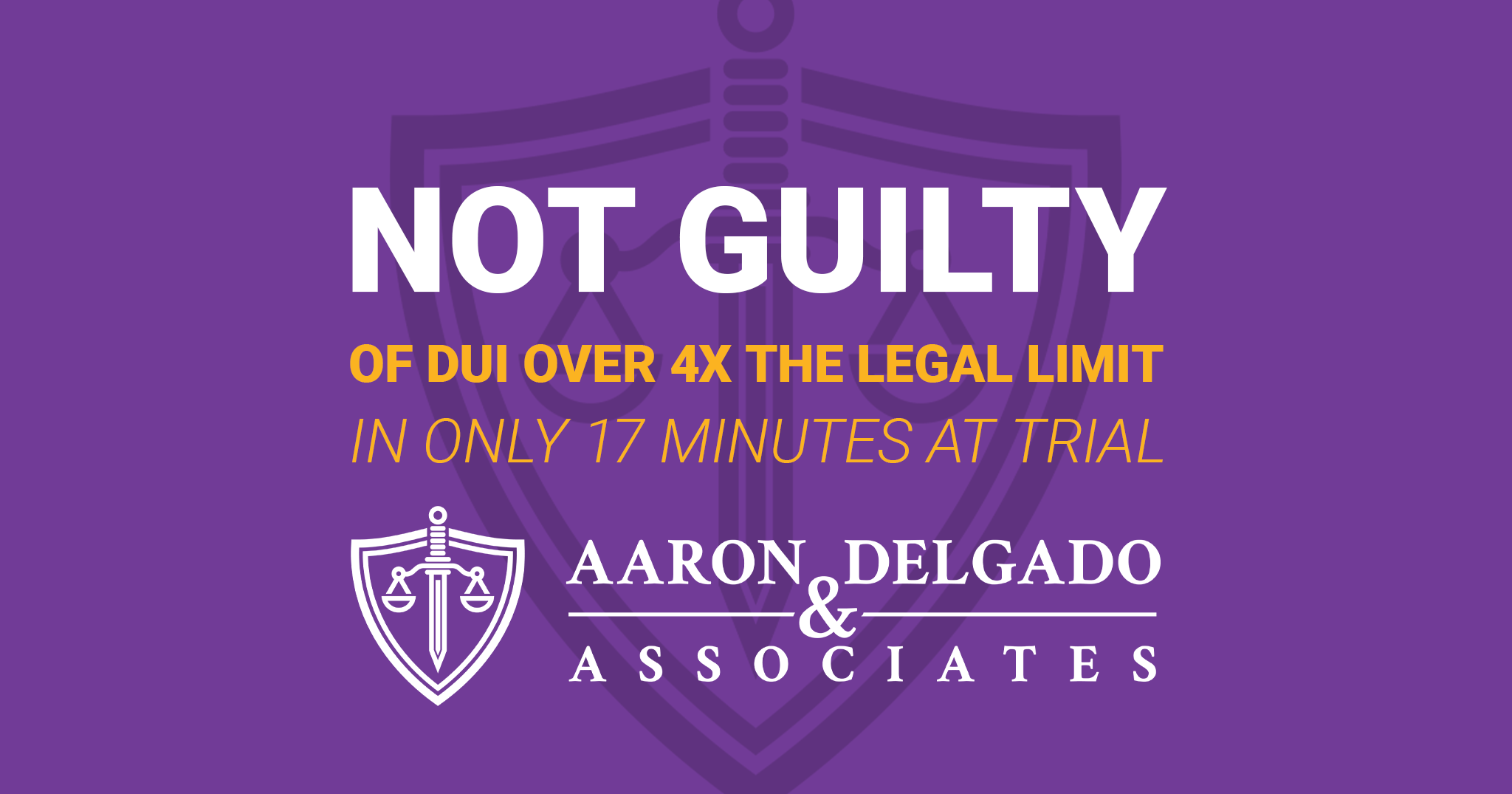 At first glance, the outcome for our client looked rather bleak. He had crashed into another car while allegedly driving erratically, gave a sub-stellar performance on FSEs, then blew over four times the legal limit. But piece-by-piece, we were able to pick apart the evidence against our client, until the truth shined through the cracks. The jury saw the light and found our client not guilty in only 17 minutes.

Unfortunately, the State is less concerned with a person’s guilt or innocence than we would like them to be once they have collected what they believe to be evidence of a crime. This case demonstrates how even if you had a false-positive result on a breath test and all the other evidence proves that you were not drunk, the State will pursue you for a DUI conviction. If you or a loved one have been wrongfully arrested for DUI, do not give up hope. Our skilled DUI lawyers are here to help prove your innocence so you can avoid being convicted of a crime you did not commit. Call us 24/7 at 386-222-6677 to schedule your free consultation with a DUI lawyer.

Florida DUI Penalties Chart
In the state of Florida, DUI (Driving Under the Influence) laws require strict penalties for drivers found guilty of driving while intoxicated, whether it be under the influence of alcohol or drugs.
Acquiring a Business Purposes Only License
If your license has recently been suspended, you may be wondering what your options are. After all, if you are not able to drive, you may have a hard time completing your daily routine. This could also make it difficult for you to run your business.
Boating Under the Influence: A Guide
The results of driving a boat under the influence can be deadly, so it should come as no surprise that alcohol is often cited as a contributing factor in numerous boating accidents in Florida. What do you need to know about driving a boat under the influence of alcohol or drugs in Florida?
386.222.6677
Close
View Our Case Results