From Life in Prison to Complete Freedom in 48 Hours - Aaron Delgado & Associates
The results on this page are no promise of future results. Clients may not receive the same or similar results.

From Life in Prison to Total Freedom in 48 Hours

STATE OF FLORIDA vs. JASON MINTON

For those of you looking to read this article – we had taken it down in light of the new allegations against Mr. Minton. We did so because it has the potential to influence the potential jury pool. Under Rule 4-3.6, Rules Regulating the Florida Bar, attorneys have restrictions on pre-trial publicity or pre-trial comment. When Mr. Minton’s trial was over, posting (with his permission) details of his case was fine. But with new charges, the dynamic has changed.

Reading the numerous comments online, it seems some people took offense to the contents of the article. The article, which was authorized with the client’s consent, was found on our website, disclaimed as a ‘past’ result” and was there to let potential clients learn about our services. As I recall there were examples of the Motions, transcripts from the proceeding and other details we felt would help a potential customer understand the hard work that went into the defense. Some sections of the article were highlighted, but I do not think it gave an accurate impression of the case. The State did not try to use a Williams Rule witness because her testimony would not have been admissible; this is because I was able to find her original testimony from Mr. Minton’s original lawyer who had saved the cassette tapes. The Judge dismissed one charge, as a matter of law, because of insufficient evidence of kidnapping – meaning that drawing every inference in favor of the State there was not enough to give it to the Jury. The Judge is an excellent and fair judge. The prosecutor is an extremely experienced, skilled and zealous prosecutor. I am not going to share further details, although the trial record would be public record, except to say the case was not a “slam dunk” for the State and there was some serious issues with it.

I am not ashamed of what I wrote or the work I performed. People come to my website to learn about my services and decide if they want to hire me. I think it is relevant that I handle difficult cases. I think it is important for prospective clients to learn about my willingness to try cases to the Jury. I think reviewing samples of my work informs the consumer. I imagine a customer, who has been accused of a crime, wants a lawyer who will fight for them, ensure their rights are championed every step of the way and who will do everything they can do to get the best result possible and challenge the State and law enforcement. I think they want a lawyer who sees them as a person who is accused of a crime – even a terrible crime – and does not take it upon himself to pass judgment on the potential client. If you think only “guilty” people need my services, you would be very wrong. Regardless of what the social media mobs may believe, our Country’s Constitution guarantees you are innocent until proven guilty. I have had individuals revile me on social media for the past criminal allegations of my clients and then come and hire me for their own case.

I do not take personal issue with Chief Chitwood’s comments or his remarks directed at me. As an elected official and one of the top local law enforcement figures, he is doing his job and he is also exercising freedom of speech – a freedom that is somewhat curtailed for lawyers and judges. Being identified as a successful defense attorney and the web traffic boost certainly supports the adage there is no bad publicity. I kid. The thing that is unfair, however, is that law enforcement releases so much information to the media before the defendant is even arrested much less before the attorney has access to it. Ormond Beach PD did not give me the information they turned over to the Press. And what was presented to the press was not everything. So the real problem is the media releases the story, without all the material that would come out during discovery, and the media prints or broadcasts whatever they think most relevant i.e. most scintillating. This taints the jury pool and will make it harder to impanel a jury that does not have preconceived beliefs.

As for the people who wish for or wonder what I would do if someone sexually assaulted my loved ones…I would be beyond livid. I would probably want to hunt them down and kill them with my bare hands. I would be destroyed and so would the victim. That is an understandable reaction and a very human one. We have laws to prevent revenge – only the State may take revenge for crime and it must do so under strict guidance and upon a verdict in a court of law. I hope that I would abide by the law. To anyone who has been a victim of any crime, my heart goes out to you. I am sorry for what you have suffered and what you continue to suffer. But please do not take the law into your own hands and please do not threaten to do as Florida has strict laws on this matter

I know nothing I say will sway most of my detractors who judge my guilty by my profession alone. But if you must judge me without knowing me in person, then please confine that judgment to me alone. The legal profession is full of wonderful people who strive valiantly for the right we all enjoy.

On July 7th, 2015, our client Jason Minton was accused of sexual battery on a person eighteen years or older and kidnapping with intent to commit or facilitate the commission of a felony.

The incident occurred after Minton and the alleged victim went to a local bar, where the alleged victim willingly consumed multiple alcoholic beverages. In her police statement, she accused Minton of force-feeding her a white pill that impaired her memory, forcing her into his vehicle, engaging in nonconsensual sexual relations with her, and confining her to his home. However, testing performed at a local hospital showed no trace of the pill - or any drug except marijuana, which she admitted to smoking - in the alleged victim's system, nor did it show a single mark of injury or sexual penetration.

The charges were extremely serious - punishable by life in prison - but the details of the alleged victim's story never made sense. To quote Attorney Aaron Delgado, "It's in the details that you'll find this case doesn't add up." (See the Defense Opening Statement.) We decided to put the facts before a jury of Mr. Minton's peers and let them determine that Mr. Minton was not guilty of the charges leveled against him.

New Evidence Against the Defendent

On November 30, 2016, the State attempted to introduce evidence of another crime committed by Mr. Minton. Before this type of testimony is admissible, the State was required to conduct what is known as a Williams Rule hearing, named after the seminal case addressing the admissibility of this type of evidence.

Evidence like this would have been extraordinarily damning because it would have allowed the jury to hear about a past criminal incident, thereby coloring the jury's view of the defendant.

Rigorous Defense Against the Williams Rule

Lead Attorneys David Damore and Aaron Delgado thoroughly prepared to defend against the inclusion of the Williams Rule witness. As part of their research, they actually tracked down Mr. Minton's defense attorney from the 1998 case where the witness originally testified. That defense attorney provided VHS and cassette tapes (pictured below) of the Williams Rule witness' testimony, which proved to be the only preserved record of what she said happened at the time.

Due to the exposure of these tapes, Mr. Delgado was able to highlight at the Williams Rule hearing all of the inconsistencies between the Williams Rule witness' present-day testimony and her testimony almost twenty years ago, thereby undermining her credibility. This allowed us to defeat the State's Williams Rule motion and prevented prejudicial evidence from being admitted against our client. 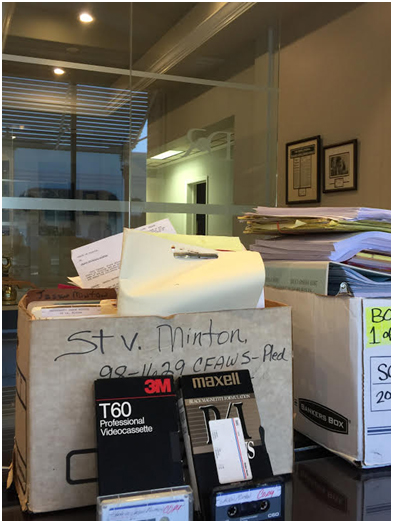 Prior to the start of the trial, we raised a very important issue in our Motion in Limine. Though it was not granted in its entirety, our submission of case law and argument on the topic ensured that the issue was preserved for later appeal should the trial have resulted in an unfavorable verdict.

During the State's presentation of evidence, Attorneys David Damore and Aaron Delgado effectively cross examined each State witness, highlighting flaws in their testimonies and shining a spotlight on law enforcement's investigatory deficiencies. The flaws in the State's case became evident to everyone in the courtroom.

After the State rested its case, we were prepared with a comprehensive Motion for Judgment of Acquittal. Once Aaron Delgado argued the Motion, the Judge dismissed the kidnapping charge completely. This was a huge victory for the defendant and dealt a big blow to the State's case.

Soon after the Judge granted the Motion for Judgment of Acquittal, and before the defense presented any of its evidence or witnesses, the prosecutor offered Mr. Minton a deal that was just too good to pass up given what was at stake: a plea to a misdemeanor offense with a non-incarceration sentence of one year's probation. Mr. Minton went from facing the possibility of life in prison to walking out of the courtroom a free man in less than two full days of trial.

Criminal Defense Lawyers Fighting for You

Here at Aaron Delgado & Associates, we will pursue every possible angle for our clients - even if that means digging through twenty-year-old evidence and finding working cassette and VHS players. If you have something to lose, hire the best attorneys you can find. Hire Your Community Law Firm.

Florida DUI Penalties [Infographic]
The State of Florida takes DUIs very seriously. A DUI is a criminal offense that carries severe penalties and will follow you around for the rest of your life. Here is a full breakdown of the penalties you may face if you’re convicted of a DUI in Florida.
DUI Reductions [Infographic]
No two DUIs are the same, which is why the consequences of getting a DUI in Florida can vary significantly. In some cases, however, it may be possible to get a DUI dropped or reduced to another lesser charge. Here is a breakdown of possible DUI charges and reductions in Florida.
Collateral Consequences of Criminal Convictions
Most people generally think of the direct consequences of a conviction—i.e. the sentence—and overlook the collateral consequences. Here is a brief overview of the wide range of potential collateral consequences that can stem from a criminal conviction.
Criminal Defense
Sex Crimes
386.222.6677
Close
View Our Case Results